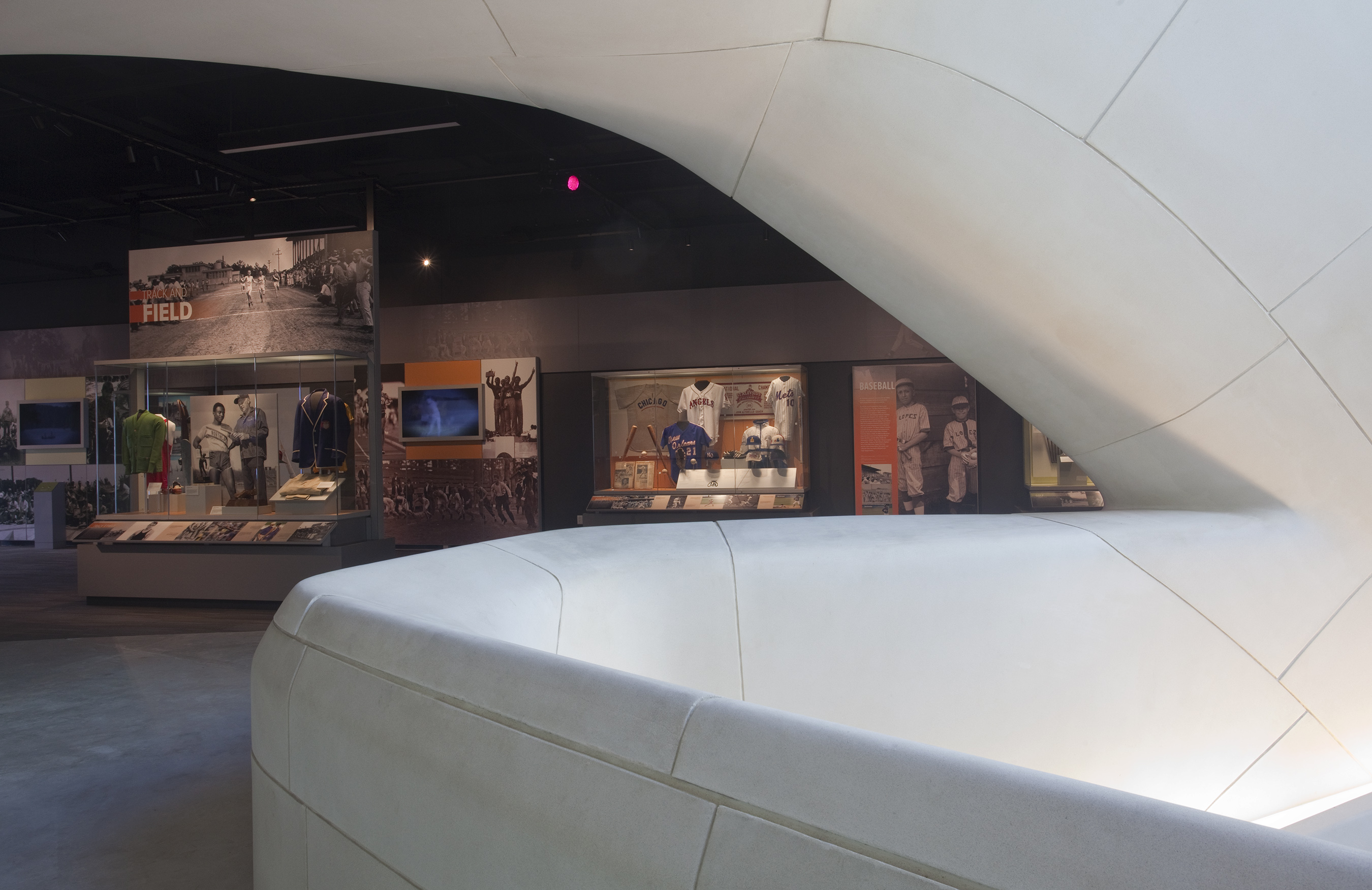 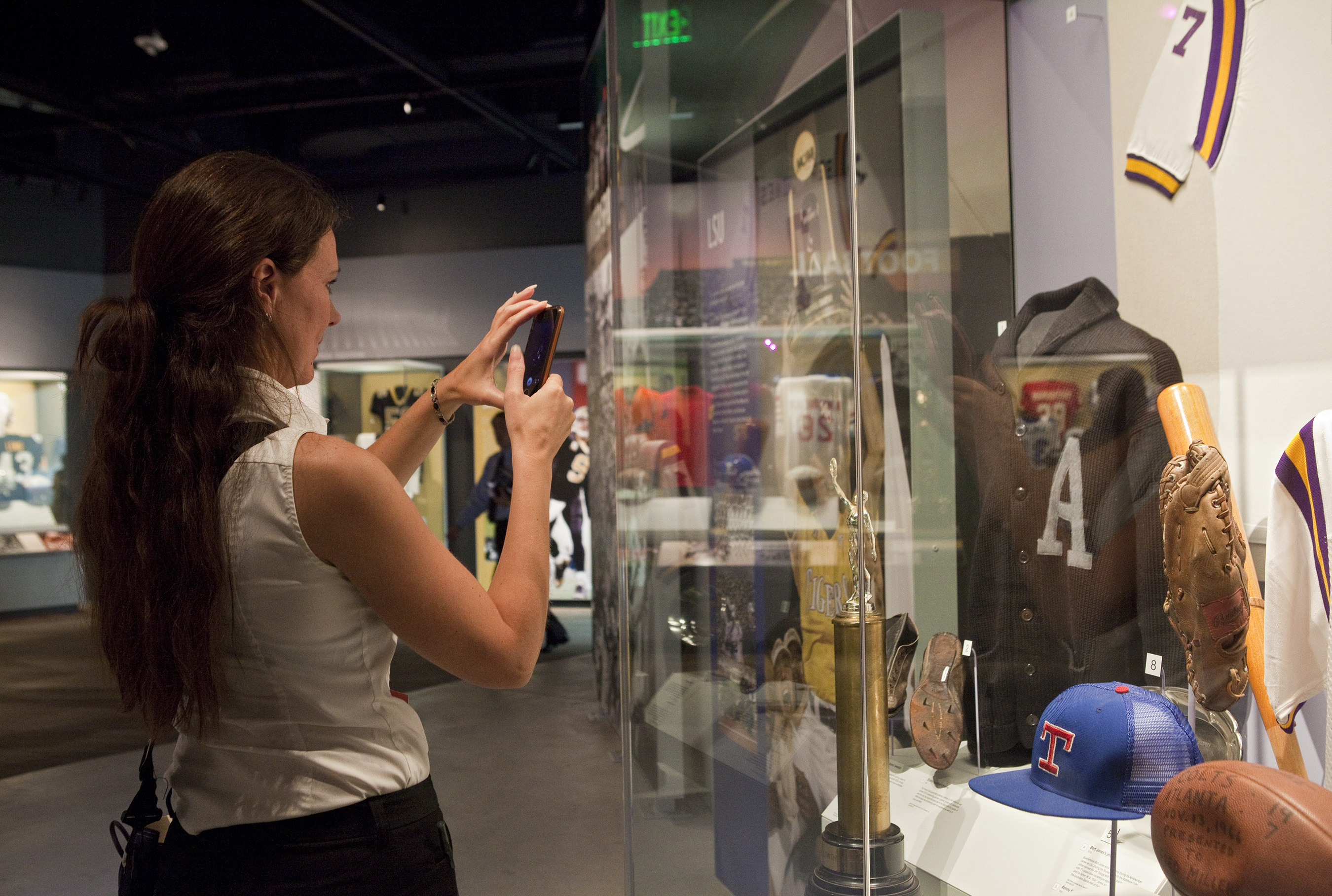 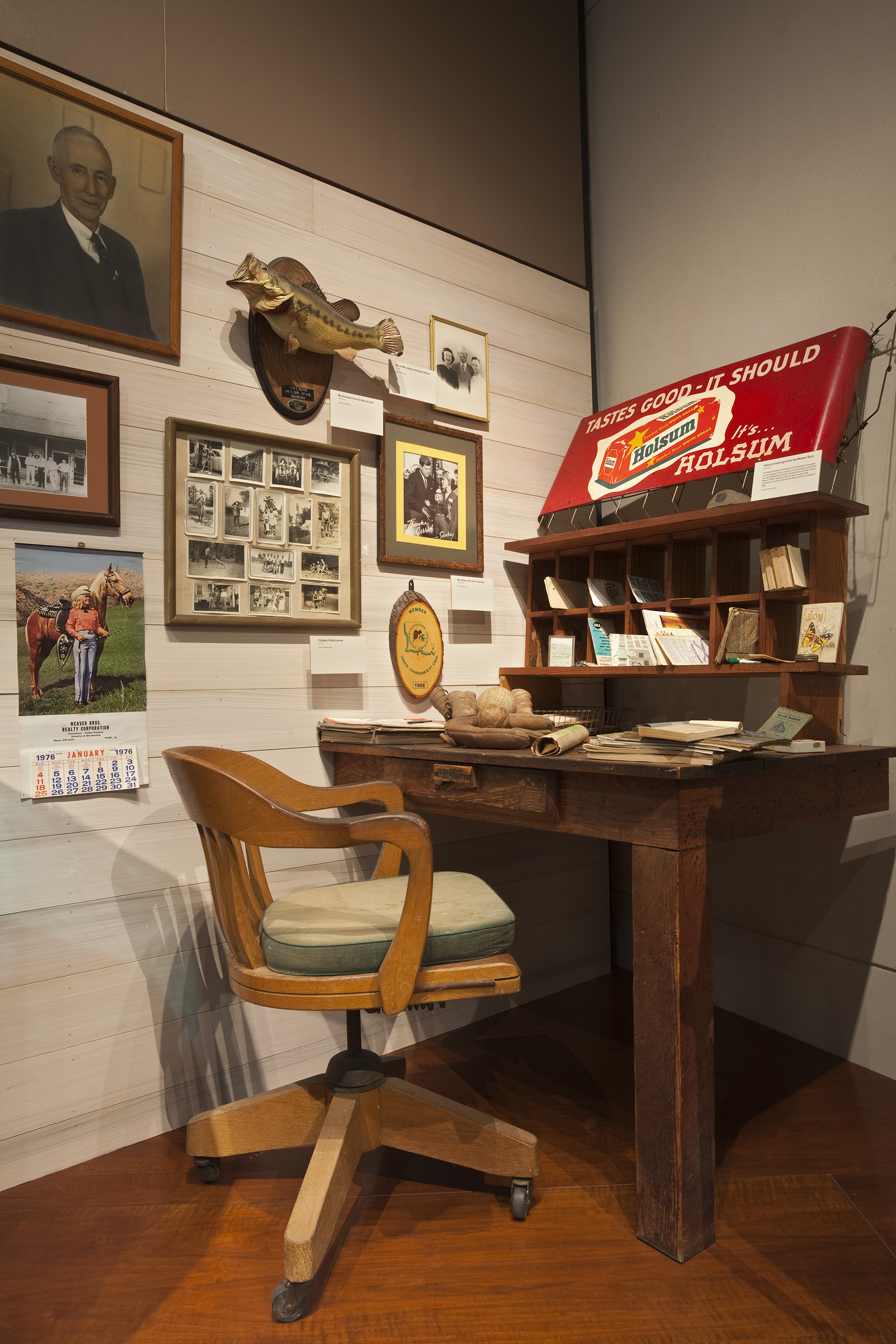 The Louisiana Sports Hall of Fame currently has these education programs: 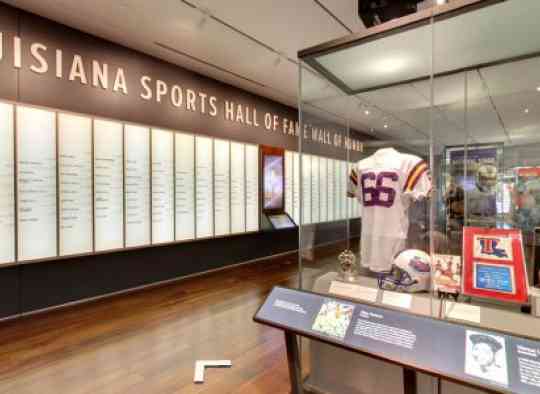 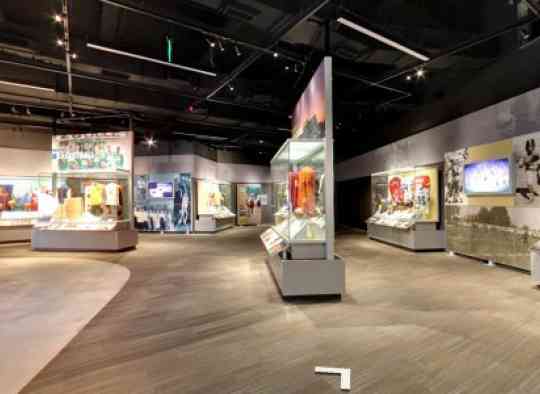 The Hall of Fame’s exhibits and interactive media trace the history of Louisiana sports and highlight the importance of sports to life in Louisiana. High-definition videos capture in-game drama and excitement, and touch-screens reveal sports stars’ life stories, career stats and colorful quotes.

Some inductees are household names, such as Archie Manning, Willis Reed, Shaquille O’Neal and Chanda Rubin, but others hold equally important spots in the state’s sporting pantheon. New Orleans-born Audrey “Mickey” Patterson, for example, was the first African-American woman to win an Olympic medal. The Hall of Fame includes the USA jersey she wore when she won the bronze medal in the 200-meter dash at the 1948 games in London.

Pete Maravich’s scrapbook of his years as one of the greatest basketball players to step onto a court, a Super Bowl XLIV commemorative football signed by all 53 New Orleans Saints after their 2010 victory and the fastest car in the world in 1963—a souped-up Ford Thunderbird—are just a few of the artifacts that make the Louisiana Sports Hall of Fame Museum in Natchitoches an up-close, personal and unforgettable fan experience.

The Northwest Louisiana History Museum in Natchitoches brings 3,000 years of history forward to the unique cultural traditions that survive and thrive in the region today.

The museum tells the story of how diverse groups of people—Caddo Indians, French and Spanish settlers, free and enslaved Africans and rural southern whites—created the region’s distinctive culture. With displays of artifacts dating from the 1700s, this museum celebrates the explorers, artists, writers, entrepreneurs and human rights leaders who embodied northwest Louisiana’s resilient spirit.

The museum also proudly highlights Clementine Hunter, the internationally renowned folk artist, with 12 of her original artworks on display—including 10 paintings about life on Melrose Plantation.

Admission includes access to all exhibitions. In partnership with the Louisiana Sports Writers Association and the City of Natchitoches, The Louisiana State Museum is proud to present this family-friendly attraction to the public.

This museum is wheelchair accessible. Parking for the museum can be found on Front Street, along the Riverbank and Rue Ducournau. Additional public parking is located at the Natchitoches Event Center and Utility Service Center lots on Second Street. Get even more information here or on facebook.

Trahan Architects of Baton Rouge designed the museum’s unique structure. The louvered copper exterior is reminiscent of the shutters of plantation homes, and the linear, earth-colored cladding is inspired by plowed fields. The interior is designed to resemble the flow of Cane River Lake, with curved walls echoing the natural cut of a river.

The museum was named the Top Architecture Project in the World in 2013 by Azure magazine, beating other major projects in London and Paris, and has won a number of other architectural accolades. 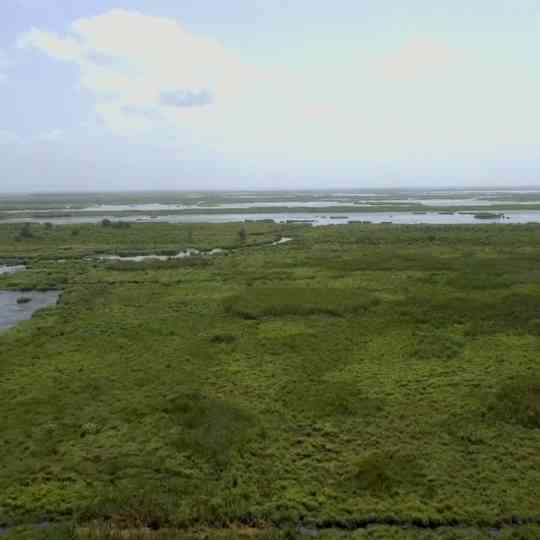 Water/Ways, an exhibition from the Smithsonian’s Museum on Main Street, explores the relationship between people and water. It explores the centrality of water in our lives including its effect on the environment and climate, its practical role... 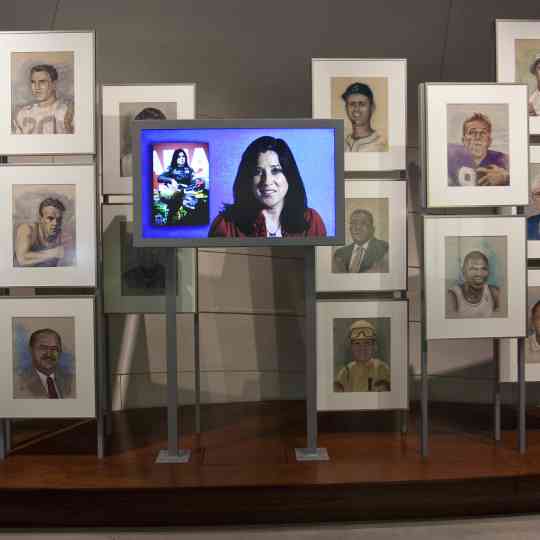 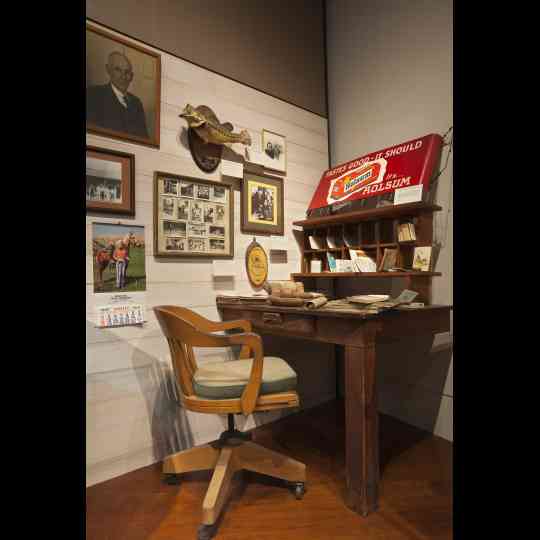 This exhibition tells the story of how diverse groups of people—Caddo Indians, French and Spanish settlers, free and enslaved Africans and rural Southern whites—created the distinctive regional culture that thrives today. With vibrant... 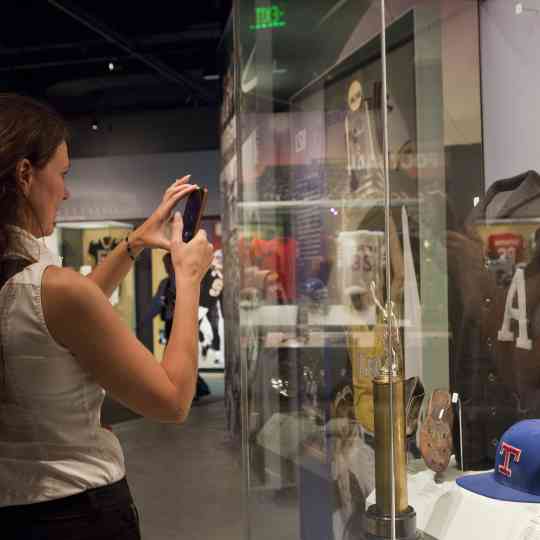 Sports are a passion in Louisiana, as much a part of our rich culture and heritage as music, food and architecture. Now there’s a place to relive the great moments in Louisiana sports history and celebrate the achievements of our... 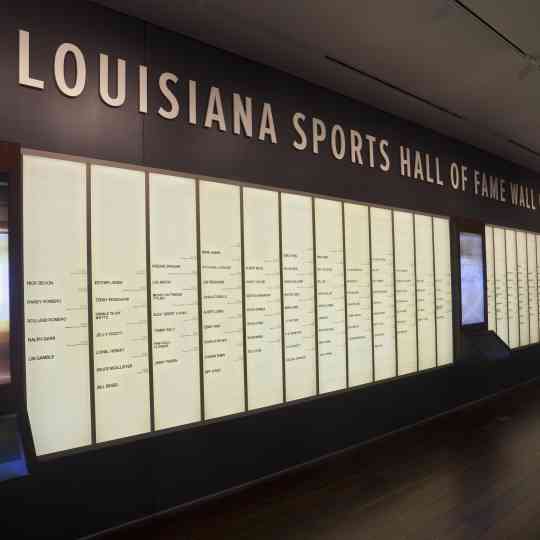 The Louisiana Sports Hall of Fame has more than 300 men and women on its roster. Our interactive database can provide you with information on Hall inductees. You can look up figures by name, sport, hometown or alma mater and find out... 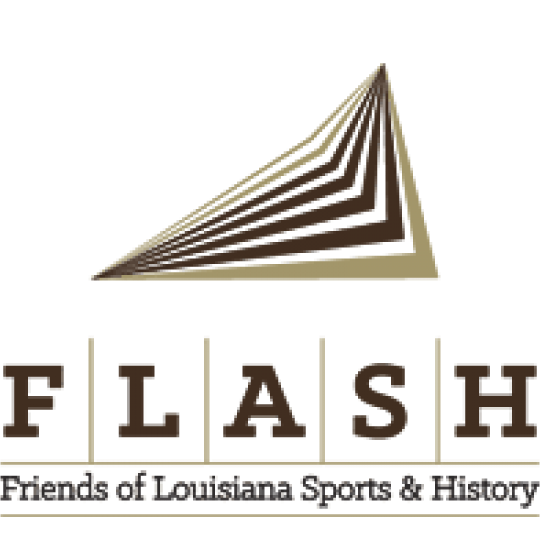 Friends of Louisiana Sports and History

Friends of Louisiana Sports and History