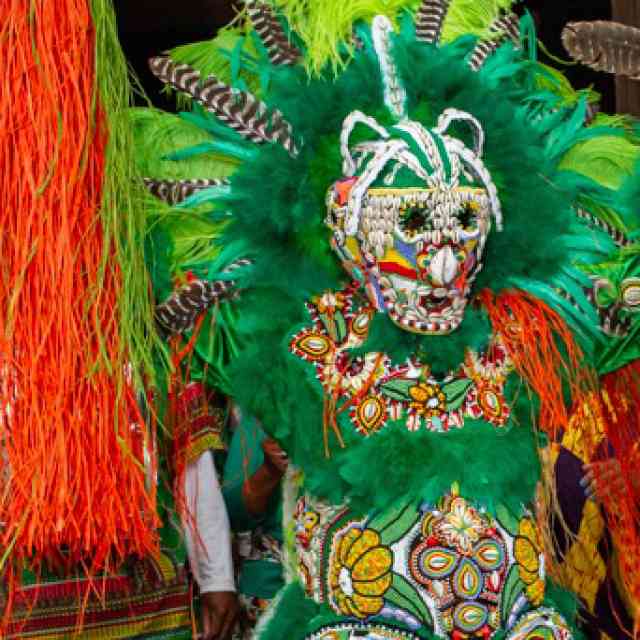 Color, sound, and energy fill the streets on Mardi Gras. African Americans have long used this annual ritual to express Black spiritual traditions. “A lot of what takes place for me on that day is almost like an out-of-body experience,” says Big Chief Shaka Zulu of the Golden Feather Hunters. Spiritual themes drawn from African, Islamic, Native American, and European systems of belief are the focus of this exhibition on African American masking traditions, including Mardi Gras Indians, Baby Dolls, and skeletons.

Mardi Gras Indians constitute one of the most vibrant carnival practices in New Orleans. African American men, women, and children adorn themselves with hand-sewn creations of feathers, beads, rhinestones, sequins, and other materials. In tribes, or gangs, they roam their neighborhoods, far removed from parades and tourists. There, they encounter skeletons and Baby Dolls, both reviving a practice that dates back more than a century. Maskers in skeleton suits and papier-mâché skull heads—most prominently represented today by the Northside Skull and Bone Gang—are out and about by dawn, awakening revelers with warnings to “get your life right.” Baby Dolls follow in the footsteps of African American working-class women who defied social norms in baby-doll costumes beginning in the 1910s. This Mardi Gras tradition thrived for decades but faded in the late twentieth century, only to be resuscitated in recent years. Today, Black masking Indians, skeletons, and Baby Dolls, along with individual maskers and traditional krewes Oshun and Nefertiti, all incorporate spiritual themes from a variety of sources, creating a profound ritual grounded in community and shared experience. 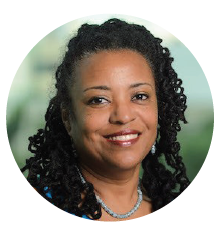 Co-curator Kim Vaz-Deville is professor of education at Xavier University. Her research
focuses on expressive arts in response to social trauma. Her book The ‘Baby Dolls’:
Breaking the Race and Gender Barriers of the New Orleans Mardi Gras Tradition (2013)
was the basis for a Louisiana State Museum exhibition and selected for One Book One
New Orleans. Her anthology Walking Raddy: The Baby Dolls of New Orleans (2018)
further explored the tradition. She is currently collaborating with Norman Francis,
Xavier’s longtime president, on his biography.

Co-curator Ron Bechet is Victor H. Labat Professor of Art at Xavier University, where he
has taught for more than twenty years. Known for intimate large-scale drawings and
paintings, he earned an MFA at Yale University. His art is grounded in the cultural
practices of the African diaspora and African American New Orleans. He is chair of the
board of directors for the Joan Mitchell Foundation and serves on the boards of the
Ogden Museum of Southern Art and Antenna Works.