Necropolis: Disease, Power, and Capitalism in the Cotton Kingdom with Kathryn Olivarius 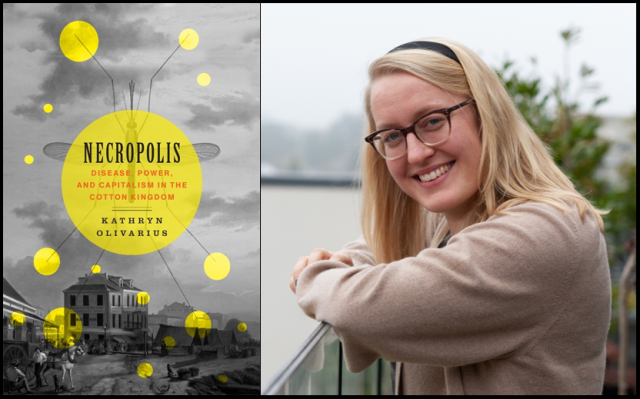 Join us for an evening with Kathryn Olivarius as she discusses her forthcoming book Necropolis: Disease, Power, and Capitalism in the Cotton Kingdom (Harvard University Press, April 2022). This program is sponsored by the Friends of the Cabildo as part of the Second Thursday Lecture Series, though please note that this program is on the third Thursday of the month. It is free and open to the public, but registration is required. The program will take place on Zoom on Thursday, January 20, 6:00– 7:30 p.m. CST. Please register here: https://forms.gle/ErTXZB7Y5wBgT9tu7

Disease is thought to be a great leveler of humanity, but in antebellum New Orleans acquiring immunity from the scourge of yellow fever magnified the brutal inequities of slave-powered capitalism.

Antebellum New Orleans sat at the heart of America’s slave and cotton kingdoms. It was also where yellow fever epidemics killed as many as 150,000 people during the nineteenth century. With little understanding of mosquito-borne viruses—and meager public health infrastructure—a person’s only protection against the scourge was to “get acclimated” by surviving the disease. About half of those who contracted yellow fever died.

Repeated epidemics bolstered New Orleans’s strict racial hierarchy by introducing another hierarchy, what Kathryn Olivarius terms “immunocapital.” As this highly original analysis shows, white survivors could leverage their immunity as evidence that they had paid their biological dues and could then pursue economic and political advancement. For enslaved Blacks, the story was different. Immunity protected them from yellow fever, but as embodied capital, they saw the social and monetary value of their acclimation accrue to their white owners. Whereas immunity conferred opportunity and privilege on whites, it relegated enslaved people to the most grueling labor.

The question of good health—who has it, who doesn’t, and why—is always in part political. Necropolis shows how powerful nineteenth-century white Orleanians—all allegedly immune—pushed this politics to the extreme. They constructed a society that capitalized mortal risk and equated perceived immunity with creditworthiness and reliability. Instead of trying to curb yellow fever through sanitation or quarantines, immune white Orleanians took advantage of the chaos disease caused. Immunological discrimination therefore became one more form of bias in a society premised on inequality, one more channel by which capital disciplined and divided the population.

Kathryn Olivarius is an assistant professor of history at Stanford University, where she has taught since 2017. Her research and teaching focus on slavery’s rise and fall in the American South and the wider Atlantic World, the history of medicine and disease, the history of race and ethnicity, and the social upheaval of the Age of Revolutions. She was awarded Stanford’s Phi Beta Kappa prize for undergraduate teaching in 2019 and the Dean's Award for Distinguished Teaching in 2021. Before moving to California, she was a Past and Present postdoctoral fellow at the Institute for Historical Research in London. Her article “Immunity, Power, and Belonging in Antebellum New Orleans,” was published by the American Historical Review in 2019 and won the Louisiana Historical Association’s award for the best article on Louisiana history. Her forthcoming book, Necropolis: Disease, Power, and Capitalism in the Cotton Kingdom will be published in April 2022 by Harvard University Press (Belknap imprint). Her research has been featured in multiple publications, including The New York Times, Scientific American, and The Washington Post. She currently lives in Palo Alto, California.