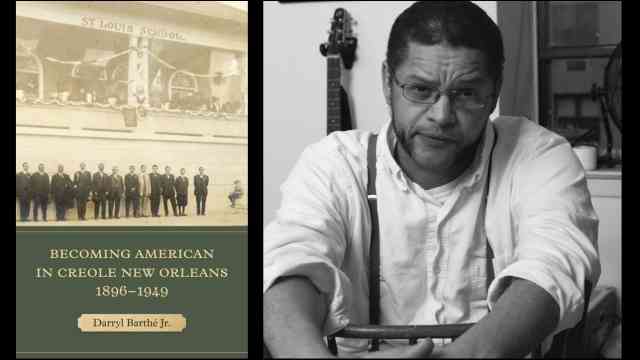 Join us from 6:00 to 7:30 CDT for an evening with Dr. Darryl Barthé Jr. as he discusses his new book Becoming American in Creole New Orleans, 1896–1949 (LSU Press, 2021). This program is sponsored by the Friends of the Cabildo as part of the Second Thursday Lecture Series. It is free and open to the public, but registration is required. The program will take place on Zoom on Thursday, August 12, 2021, 6:00 – 7:30 p.m. CDT. Please register here: https://forms.gle/X2Px4GwkTZp6a6xd7

Extensive scholarship has emerged within the last twenty-five years on the role of Louisiana Creoles in the eighteenth and early nineteenth centuries, yet academic work on the history of Creoles in New Orleans after the Civil War and into the twentieth century remains sparse. Darryl Barthé Jr.’s Becoming American in Creole New Orleans moves the history of New Orleans’s Creole community forward, documenting the process of “becoming American” through Creoles’ encounters with Anglo-American modernism. Barthé tracks this ethnic transformation through an interrogation of New Orleans’s voluntary associations and social sodalities, as well as its public and parochial schools, where Creole linguistic distinctiveness faded over the twentieth century because of English-only education and the establishment of Anglo-American economic hegemony.

Barthé argues that despite the existence of ethnic repression, the transition from Creole to American identity was largely voluntary as Creoles embraced the economic opportunities afforded to them through learning English. “Becoming American” entailed the adoption of a distinctly American language and a distinctly American racialized caste system. Navigating that caste system was always tricky for Creoles, who had existed in between French and Spanish color lines that recognized them as a group separate from Europeans, Africans, and Amerindians even though they often shared kinship ties with all of these groups. Creoles responded to the pressures associated with the demands of the American caste system by passing as white people (completely or situationally) or, more often, redefining themselves as Blacks.

Becoming American in Creole New Orleans offers a critical comparative analysis of “Creolization” and “Americanization,” social processes that often worked in opposition to each another during the nineteenth century and that would continue to frame the limits of Creole identity and cultural expression in New Orleans until the mid-twentieth century. As such, it offers intersectional engagement with subjects that have historically fallen under the purview of sociology, anthropology, and critical theory, including discourses on whiteness, métissage/métisajé, and critical mixed-race theory.