Asian-Cajun Fusion: Shrimp from the Bay to the Bayou with Carl Brasseaux and Donald Davis 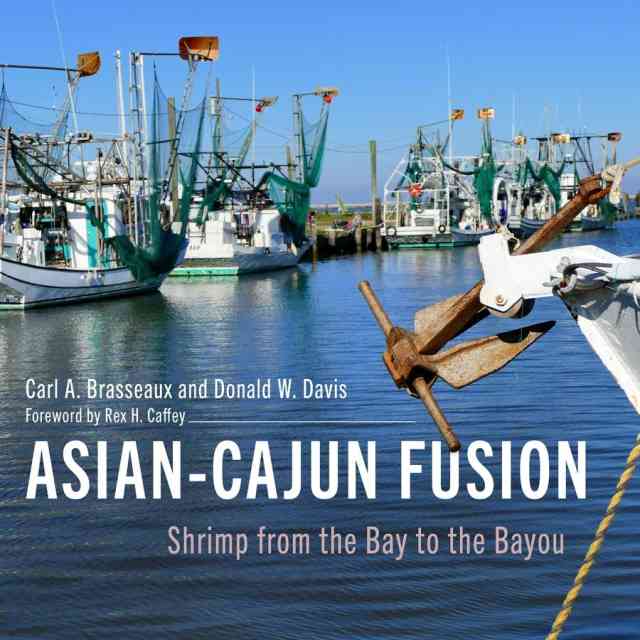 Join us for an evening with Carl Brasseaux and Donald Davis and they discuss their recent book, Asian-Cajun Fusion: Shrimp from the Bay to the Bayou (University Press of Mississippi, 2022). This program is sponsored by the Friends of the Cabildo as part of the Second Thursday Lecture Series. It is free and open to the public, but registration is required. The program will take place on Zoom on Thursday, August 11, 2022, 6:00–7:30 p.m. CDT. Please register here.

Shrimp is easily America’s favorite seafood, but its very popularity is the wellspring of problems that threaten the shrimp industry’s existence. Asian-Cajun Fusion: Shrimp from the Bay to the Bayou provides insightful analysis of this paradox and a detailed, thorough history of the industry in Louisiana.

Dried shrimp technology was part of the cultural heritage Pearl River Chinese immigrants introduced into the Americas in the mid-nineteenth century. As early as 1870, Chinese natives built shrimp-drying operations in Louisiana’s wetlands and exported the product to Asia through the port of San Francisco. This trade internationalized the shrimp industry. About three years before Louisiana’s Chinese community began their export endeavors, manufactured ice became available in New Orleans, and the Dunbar family introduced patented canning technology. The convergence of these ancient and modern technologies shaped the evolution of the northern Gulf Coast’s shrimp industry to the present.

Coastal Louisiana’s historic connection to the Pacific Rim endures. Not only does the region continue to export dried shrimp to Asian markets domestically and internationally, but since 2000 the region’s large Vietnamese immigrant population has increasingly dominated Louisiana’s fresh shrimp harvest. Louisiana shrimp constitute the American gold standard of raw seafood excellence. Yet, in the second decade of the twenty-first century, cheap imports are forcing the nation’s domestic shrimp industry to rediscover its economic roots. “Fresh off the boat” signs and real-time internet connections with active trawlers are reestablishing the industry’s ties to local consumers. Direct marketing has opened the industry to middle-class customers who meet the boats at the docks. This “right off the boat” paradigm appears to be leading the way to reestablishment of sustainable aquatic resources. All-one-can-eat shrimp buffets are not going to disappear, but the Louisiana shrimp industry’s fate will ultimately be determined by discerning consumers’ palates.

Donald W. Davis has been involved for more than fifty years in coastal-related research on the wide array of renewable and nonrenewable resources vital to the use of the wetlands. His work has appeared in numerous journals including Annals of the American Association of Geographers, Shore & Beach, Journal of Soil and Water Conservation, Louisiana Conservationists, and Louisiana History. He is coauthor of Asian-Cajun Fusion: Shrimp from the Bay to the Bayou and Ain't There No More: Louisiana's Disappearing Coastal Plain, both published by University Press of Mississippi, and author of Washed Away? The Invisible Peoples of Louisiana’s Wetlands.

Carl A. Brasseaux, former director of the Center for Louisiana Studies and a Louisiana Writer of the Year, has spent a lifetime studying the peoples and cultures of the Louisiana coastal plain. He is author or coauthor of more than forty books, including Asian-Cajun Fusion: Shrimp from the Bay to the Bayou; Ain’t There No More: Louisiana’s Disappearing Coastal Plain; Acadian to Cajun: Transformation of a People, 1803–1877; and Creoles of Color in the Bayou Country, all published by University Press of Mississippi.